Sir John Talbot’s School alumni Sam Boardman has just graduated from the University of Birmingham, achieving a First Class Masters Degree in Theoretical Physics and Applied Mathematics! Sam is now going on to start his diploma, teaching Physics to secondary students in Birmingham, with the King Edwards Consortium. During his time at SirJohn Talbot’s Sam represented the school as Head Boy and has returned post leaving to occasionally help in the schools Maths Department from time to time.

Sam would like to pass on his news and thanks, to all who helped him during his time at Sir John Talbot’s School. We wish him all the best in his future career! 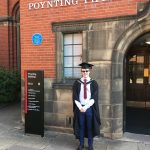 Posted by marchesadmin on 18th July 2019, under SJT